I can take it. It wasn’t love at first anyway. Cleveland and I had some bad blood for a while.

The first time I was set to go there was on a FAM trip, but I was laid off the day before departure, so the trip was off.

The next time I’d planned to spend a day there during the last leg of an Ohio road trip. We arrived at the B&B at sundown, after a long and frustrating drive from Columbus fraught with navigational boondoggles, only to find that the proprietor had accidentally double-booked our room and it was already taken. We were so tired and grumpy that we impulsively chose to drive all the way home to Ontario rather than search for new accommodations.
I could have been forgiven for filing Cleveland under Not Meant To Be.

My BFF Jane and I love to take road trips. We’ll go anywhere, just for the sake of going. We drove all the way to Kalamazoo once just because it has a cool name.

We were contemplating potential destinations for our next road trip and Cleveland came up. Since we’d already covered most of the major cities within a six-hour drive, we went for it, despite harbouring suspicions that the city might have it in for me.

Finally, I made it to Cleveland. I had no idea what to expect. With the way that people love to ridicule and denigrate the place I half expected it to be grim, but I knew it had the Rock & Roll Hall of Fame and at least a couple good places to eat, which was good enough for us.

Here are some of the reasons I love Cleveland:

The Rock & Roll Hall of Fame and Museum

The Rock & Roll Hall of Fame is worth the trip in itself if you’re a fan of music and history like me. There are artifacts representing all aspects of the history of rock and roll, many from big names that give you a thrill to see face-to-face, but also lots of exhibits about people and organizations you’ve never heard of but had a huge impact on popular music. Even if you don’t enjoy anything inside, the building is a sight to see, since it was designed by I.M. Pei, and is an important architectural work. 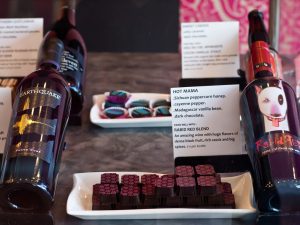 When I met the proprietors of Lilly Handmade Chocolates (neither of them are named Lilly BTW) I said to them, “You have a lot of nerve living my dream life!” If I could stand a bricks-and-mortar existence then this is likely what I would aspire to. Their business model is brilliant. Not only do they sell scrumptious and sophisticated handmade chocolates with inventive flavour combinations, the shop also has a liquor license, so they can offer chocolate tasting events where each delectable morsel is expertly paired with a wine, craft beer, or liqueur to enhance the flavour. Genius! My personal fave is the Terrapin Slider.

This charmingly artsy neighbourhood is home to lots of great but unpretentious restaurants, art galleries, curio shops and fun boutiques. Plan your visit to include the second Friday of the month and you can enjoy the monthly Tremont Art Walk. While you’re there, don’t forget to check out The Christmas Story House, which is the original house from the movie that was bought on eBay in 2004 and turned into a museum. Other neighbourhood landmarks include St. Theodosius Russian Orthodox Cathedral with its outstanding onion domes and whose interior was used to film the wedding scene in The Deer Hunter. And Literary Road has to be one of my favourite street names ever!

The Locals Are Friendly

This may sound weird but one of the things that struck me most during my first visit to Cleveland was how friendly people are there. Average people would stop us in the street and strike up a genuine conversation. I must spend too much time in Toronto where everyone ignores each other all the time because I was suspicious at first. It took a few of these interactions to realize that nobody had an agenda in talking to me, they were just really friendly and pleased to have someone take an interest in their city.

It’s nearly impossible to miss this monument if you visit Downtown Cleveland as it is prominently situated in Public Square. What you might not realize when you see this imposing and ornate Civil War monument, is that you can go inside. What at first glance may seem to be a base of solid granite, actually contains a tiny museum. By chance it was open on the day we were exploring the area and the two volunteer docents were very proud to enthusiastically tell us all about the history of the monument, which was funded entirely by public subscription, and at the time it was built in the late 19th Century it was one of the largest structures in America.

The world’s largest of anything is enough to get my attention, but even moreso when it’s the world’s largest rubber stamp and it was created by Claes Oldenburg and says “FREE” Unfortunately when I got my photo taken it was windy and raining and my hair was plastered across my face making me look like the lovechild of Cousin It and Medusa, so we’ll go with a stock image on this one.

When Chairman Kaga asks the question, “Whose cuisine reigns supreme?” the answer is often Iron Chef Michael Symon, and this hometown boy has stayed true to his Cleveland roots by having his two signature restaurants, Lola and Lolita, here. I ate at Lolita and it was fantastic. Beyond the big names from Food Network, Cleveland is most definitely a city for good eating and needs to be explored.

Part of the museum was closed when we visited and it was still a tremendously worthwhile experience. Their collection is quite massive and includes the gamut of historical artifacts, decorative works, and fine art. The Cleveland Museum of Art is located in the University Circle neighbourhood, and I wish I had had more time to explore as its treed spaces and historic buildings were so inviting.

Even people who don’t like Cleveland concede that Melt is da bomb. The evil geniuses behind Melt Bar & Grilled have taken a simple dish that is universally loved, the grilled cheese sandwich, and taken it to every conceivable extreme. Their creations have names that pay homage to the local geography and popular culture. For instance, The Dude Abides contains meatballs, marinara and mozzarella sticks and invokes The Big Lebowski, whereas Parmageddon pays tribute to the nearby Polish enclave of Parma and features pierogi, kraut, grilled onions, and cheddar. Die-hard Melt fans get a 25% discount for life, but only if they are committed enough to get a Melt logo tattooed somewhere on their bod. As a printmaking aficionado, their gloriously zany collectible posters depicting the monthly special are the most tempting of all. Despite having three locations now, Melt is always busy, so going at an odd time is a terrific way to avoid having to wait a long time for a table.

Although it’s a marvellous place to stop in, there isn’t a lot to say about Westside Market. It’s a typical example of the kinds of markets you find in many cities, housing dozens of independent businesses and producers of artisanal food products. There are lots of scrumptious baked goods, fresh produce, prepared foods and deli selections and it’s an excellent spot to pick up a few provisions. Since we were on our way out of town, provisions were superfluous, but we did pick up a delightfully perplexing little bundle for the road. Dichotomy corn is better experienced than described. It sounds so wrong in theory, but in practice it is delicious and moderately addictive. Dichotomy Corn is what happens when the diabolical minds at Campbell’s Popcorn Shop level up your garden-variety cheesy popcorn by making it into caramel corn, thereby creating a sweet and salty dichotomy to ponder while your sugar and sodium levels spike simultaneously.

So go ahead and mock me all you want, but I know Cleveland is a great destination. I’ve been there twice now and would happily make a return visit. There’s lots more stuff in and around Cleveland that I’d love to check out, such as the Pro Football Hall of Fame, Chagrin Falls, another visit to the B.A. Sweetie Candy Company, or trying the duck frites at The Greenhouse Tavern. Anyway, that’s just a few things that all the haters out there are missing out on.

Posted In: Things To Do, USA

This site uses Akismet to reduce spam. Learn how your comment data is processed.